Home » REGIONS » Kouga » Searsia incisa var. effusa, the rub-rub currant
Back to Category Overview
Total images in all categories: 11,544
Total number of hits on all images: 6,625,936 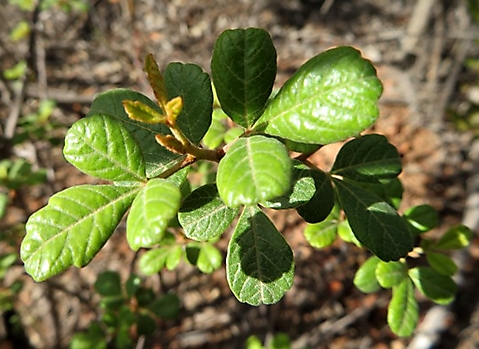 Searsia incisa var. effusa, found in the Kouga but more widespread throughout the west and south of the country, is commonly known as the rub-rub currant.

This name came about because the pale brown, hairy fruits are edible, grown in clusters on small spur-branchlets. Before eating them, the small, somewhat ellipsoid drupes are picked in handfuls and rubbed between the hands to remove the hairs; hence rub-rub currant. When did a southern African human first rub and eat a rub-rub currant?

Every seed is covered in a thin, fleshy layer, without which dispersal of the seeds would have been a problem. It is the consumers of fruits that ensure they do not rot in a heap under the tree, bush or herb. This would have endangered the long-term survival of mere seed-bearing species with no help from hungry friends.

People learnt about the real purpose of fruits as seed-coverings, millions of years since fruit were first eaten by all kinds of animals that might still think Eden was made for them, if they could think at all. The fruit consumers have always been the dutiful dispersal servants of the fruit-bearers.

Hunter-gatherers wandering barefoot through veld on extended trips caused by hunger, collected fruits, roots and bulbs continually between the big event hunts of those wild animals within the killing capacity of the tribe. They needed strong teeth and stomachs for their serendipitous, fruit and vegetable meals, taken in small instalments during long days of foraging. Many days of famine must have often been spaced by few days of feast, as well as some days of belly ache from taking chances.