Home » REGIONS » Kouga » Phylica lachneaeoides, the pinkstar hardleaf
Back to Category Overview
Total images in all categories: 11,544
Total number of hits on all images: 6,625,910 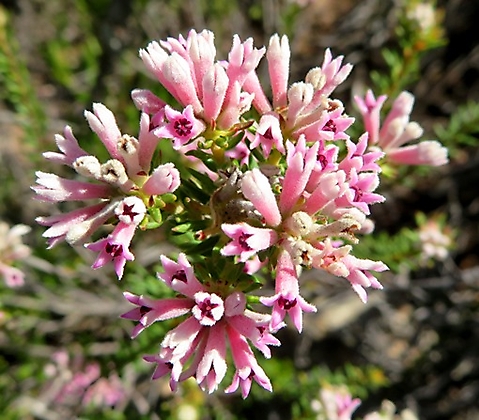 Several Phylica lachneaeoides flower clusters, each on its own branched stem-tip, grow close together here in the Kouga Valley during May. Doing justice to the common name of pinkstar hardleaf will happen a little later, when the flowers have opened more widely.

The shorter buds among the open flowers still hold their five lobes together in a club-shaped structure. Open flowers are pink, while those past bloomtime are greyish, the sepal lobes again partly closed.

When many tips of bigger stems on a well-grown bush perform like this, the blooming of this Phylica is spectacular. The photo was taken in May (Vlok and Schutte-Vlok, 2015; Bond and Goldblatt, 1984; iNaturalist).