Home » REGIONS » Kouga » Skilderkrantz
Back to Category Overview
Total images in all categories: 12,082
Total number of hits on all images: 7,379,579 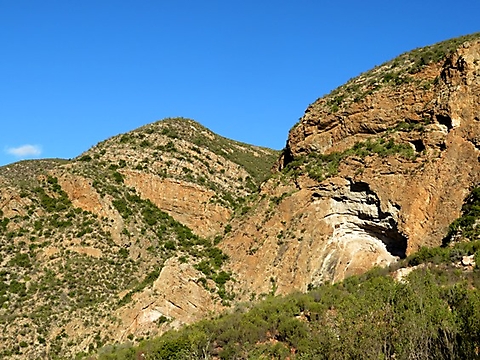 Skilderkrantz is the Dutch-Afrikaans name of a conservation venture in the Kouga. The name mentions majestic rock formations of the area, some of which retain paintings of the San people who lived here long ago. Those residents set an example, knowing much about light, resource-sustaining lifestyles in their time.

Skilderkrantz, painted rock, is a name used for several diverse ventures in different parts of South Africa. Here in the Kouga, the focus is on returning a group of marginal farms to the natural state of before, conserving what there is within the realms of the possible.

The word “rewild” is used. It holds promise for the future of nature in the area, but reminds us of long odds and species extinctions that are proliferating in our time of climate change.

Links already exist between conservation activities in the region. Concerted effort does make a difference, sometimes delivering the breakthrough. Large tracts of local land benefit from management efforts by skilled people, the intensity varying according to resources and the mandates of ownership and projects.

Links exist between the Garden Route National Park and the Addo National Elephant Park, as well as some inbetween areas. The main venture between these two is the Baviaanskloof Mega Reserve of which the Skilderkrantz Nature Reserve forms part. All of this augurs well for the future, but as always, talk is cheap.

Fynbos and renosterveld plant species of this region have not been studied and described to the extent reached in the Western Cape, where more and older universities and botanical gardens have been serving a bigger population for long.

Many routes less travelled and many lesser-known natural treasures await here, welcoming especially those that care for the land more enthusiastically, and hoping that more will join such ranks in whatever ways possible (https://skilderkrantz.com).