Home » REGIONS » Kouga » Mountains and memories
Back to Category Overview
Total images in all categories: 12,068
Total number of hits on all images: 7,363,103 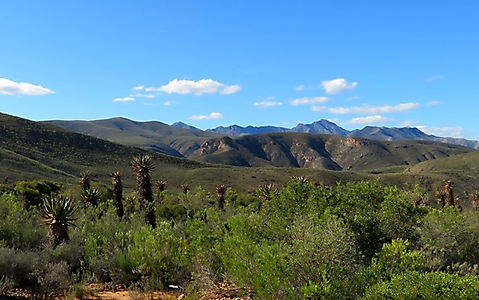 And what lies beyond the blue mountains? The Baviaanskloof and more mountains. And beyond that? The Karoo that is flat and dry.

Long ago children of the Langkloof learnt the relevant geography lessons from few wise old locals prepared to talk about big world matters. And beyond the Karoo? Oh, that’s too far, never been there!

Today it’s different. There’s a tarred road through the Langkloof with white and yellow lines; and lots of cars to go places. Children of the Kloof are now educated by learned people in far-off institutions and often don’t come back. And there’s TV. The radio is no longer powered by a car battery charged by wind turbine.

The blue of the Kouga Mountains is no longer out of reach, reserved for grandpa and friends to go hunting once a year in winter when there’s snow on the peaks. Upcountry places like the Langkloof and the Kouga received civilisation with farming crop changes in well-spaced instalments over several centuries.

First the indigenous San and Khoi tribes lost control in the wake of European newcomers from the west and African ones from the east. Early farmers had sheep, wheat and what-not, eking out small, mixed-farming plans dependent on water.

All of that happened long before innovations like apples and berries were introduced in the Kloof, citrus and goats in the Kouga. Outsiders coming into the Kouga Valley no longer get typhoid fever from the drinking water.

The Langkloof farm, Somerset’s Gift, changed hands in the same family for generations. It kept the name from the days that Governor at the Cape, Lord Charles Somerset, gifted the land to a farmer after sleeping over in the neighbourhood in the 1820s, en route to inspecting the Colony border situation in the Eastern Cape.

Progress is insidious. It discovered the Kloof and all of this changed, first slowly and then dramatically more than a century later. Big scale commercial farming and countless apple trees in bigger orchards required the old buildings and fences to be removed.

A child borne on Somerset's Gift, visiting the region later, had to judge from landmarks in the hills in which row of apple trees the old family home and the farm school once stood. His grandchildren won’t even know where to look.

The story is spread across farms the world over, repeated over time in generational increments of planned improvement and unexpected loss.