Home » REGIONS » Kouga » Diosma prama in renosterveld
Back to Category Overview
Total images in all categories: 11,506
Total number of hits on all images: 6,514,566 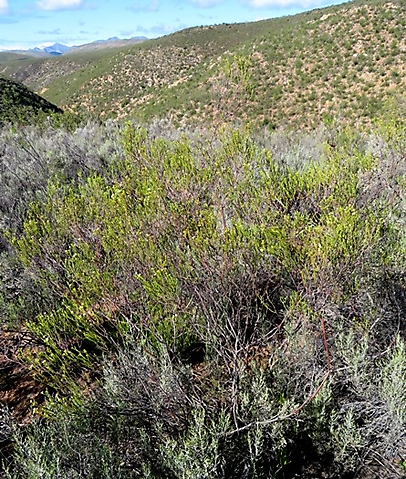 The yellow-green shrub in the foreground is Diosma prama, doing well among the grey-leaved renosterbos in the Kouga. Commonly known as Vicksbuchu or gum bitterbuchu, the plant is part of the buchu domain.

The Diosma genus forms part of the Rutaceae or citrus family, as do most of the other genera that includes species called buchu.

There is usually an added descriptor in the common name of each buchu species to pinpoint identity and market the specialty feature. Sadly, in modern times the significance of some of these names are lost on the later generations in changed lifestyles. Traditional medicine is also adopting modern traditions.

Interesting extras are the Pteronia species also called buchu. Pteronia camphorata var. camphorata is, among other names, also known in Afrikaans as norraboegoe (nape (of the neck) buchu), a connotation maybe still understood by few but not found in the descriptions that came to hand. P. adenocarpa, also medicinally important, is known as bokboegoe (goat or antelope buchu), as well as boegoekaroo (buchu Karoo). What’s more though, is that these Pteronia plants are in the Asteraceae family, while buchu-named plants are mostly in Rutaceae.

And then there are Eriocephalus punctulatus that is known as boegoekapok (buchu snow) and the small tree Croton gratissimus var. gratissimus known as Kalahariboegoe. Eriocephalus is another Asteraceae family genus, while Croton forms part of Euphorbiaceae.

Many of the newer common names given to plants are the translated Latin or Greek names, derived from the scientific name. In olden times, locals unencumbered by Greek and Latin, living close to nature, named things to reflect their experiences and recognise the plants by their outstanding features, uses to be reminded of, or warnings to be heeded about danger, particularly toxicity.

The most apt names stuck, reaching written records that in turn boosted the spread and acceptance of many colloquial plant and animal names. This process continues today where people take an interest and roses smell sweet enough to agitate about names.

There aren’t, however, so many unnamed plants and animals as in the past, unless there's an upswing in importing exotics, which most people with such inclinations now know should be done with great care. The naming habit, apart from naming one’s children and replacing politically awkward place names, is therefore no longer a field of much activity and sharply honed skill in the natural world.

Nomenclature innovation remains high in the sciences generating new knowledge, while accelerating in technologies where digital apps and specialised robots proliferate. Such things often receive acronymised and number-ridden names to facilitate electronic ordering in the trade, instead of mellifluous words that attract poets and make kids laugh (Vlok and Schutte-Vlok, 2015; Pienaar, 2008; Van Wyk and Gericke, 2000; iNaturalist).