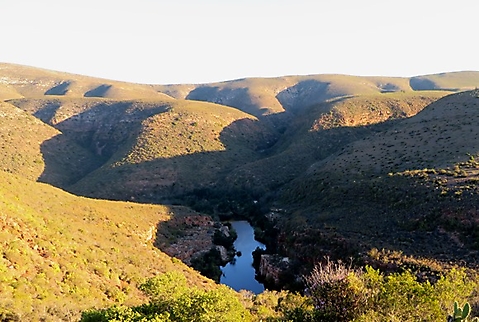 The Kouga River catchment area begins east of Uniondale in the east of the Western Cape. The east-flowing river is flanked by the Krom River to the south and the Baviaans River to the north, the latter joining the Kouga as a tributary just before the Kouga Dam. Further downstream, the Kouga joins the Groot River and then the Gamtoos that reaches the sea east of Jeffreys Bay.

These river valleys are shaped by three roughly parallel mountain ranges, the Baviaanskloof Mountains south of the eastern Karoo, the Kouga Mountains in the middle and the Tsitsikamma Mountains near the sea. Permanent and seasonal streams, numerous and often small, cut through the sandstone, including the Sepree River and the Louterwater tributary of the Kouga.

Periodic drought and flood modify the landscape and test the residents. Particularly the farmers of the region make the most of bits of floodplain and lower, arable slopes, sometimes having to start from scratch after climatic extremes.

Opportunities and constraints of the Langkloof and adjacent moutain-fringed valleys have been dealt with by the locals and their predecessors with character building or breaking side-effects. Modest numbers of hardy residents have been making living and life for generations on this land, so deceivingly alluring and sometimes so harshly demanding.

Crop changes to satisfy markets while respecting the land, stock management in terms of understanding carrying capacity, restoring natural vegetation and the planting of for instance spekboom in arid parts for retaining water, all form part of long-term strategies seen in some parts, sometimes sporadically.

These things all aim at improved livelihood for residents and sustaining the carrying capacity of the land. Concerted effort in a community requires shared knowledge and resolve. Specific issues will enter and grip some minds, never all.

Particular to the rivers, awareness exists for the last few decades of the presence of a fish species, the Cape galaxias, or Galaxias zebratus endemic to the Cape Floristic Region in the Kouga and Krom River. Knowing of its near threatened status is an important first step for maintaining the conditions for its conservation.

And so we learn and implement, forget and neglect, learn again with new resolve, unless we leave that for the next generation. If we love it enough, the efforts will make the grade for pride in the heritage. And avoid scolding from deprived generations to come (Wikipedia).