Home » REGIONS » Kouga » Chironia baccifera, a plant full of stories
Back to Category Overview
Total images in all categories: 12,068
Total number of hits on all images: 7,363,196 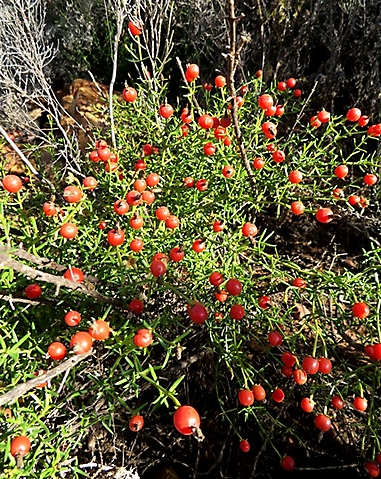 This Chironia baccifera shrublet covered in fruit in the Kouga Valley during May was one of the most colourful plants seen there in season. The fruits are eaten by birds and not by people, while several of the plant parts are used medicinally.

The Afrikaans common name of aambeibossie (little haemorrhoids bush) is quite ominous in this regard. Ancient Greek healers had a notion that plants resembling human body parts should be used in treating conditions of those body parts, hence these red fruits in the particular context. During the Middle Ages this notion was elevated in the theological conclusion that God assisted people in mastering science by leaving such clues.

Another scientific curiosity related to this plant is the pinkish purple flower colour of several Chironia species, appearing very similar to the human eye. Carpenter bees that pollinate flowers of the genus can see ultraviolet light and therefore differentiate the species on the basis of flower colour.

They can also buzz around the flowers to dislodge the pollen from the anthers at a particular frequency of wing movement. Not quite recognised as the inventors of buzz pollination, but co-evolved with their partner plant species to add this phenomenon to the wonders of veld ecology (Curtis-Scott, et al, 2020; iNaturalist).