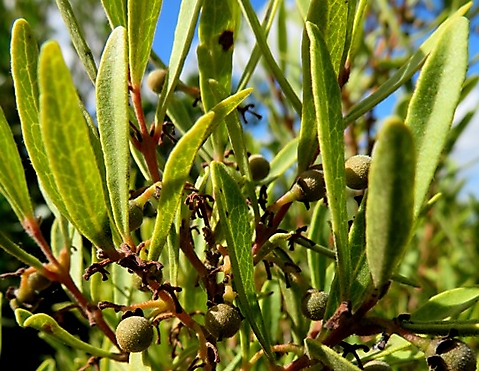 This Euclea crispa subsp. crispa tree bearing narrow leaves was seen in the Kouga, fruiting during May.

The leaves are erect, showing vein translucence clearly where the sunlight is from behind. The leaf margins are entire although not very smooth, while faint hairiness is perceptible, often lost from older leaves where hairiness occurs at all.

There may be a papery leaf texture causing the leaves to rustle against each other. The leaves have short, sturdy petioles, reddish as the upper branchlets, while the fruit pedicels are cream.

These fruits normally turn red-brown and later black when ripe. In picture there are only olive-green ones present and numerous shrivelled pedicels of fruits that have already disappeared; maybe caused by a break in the season’s fruiting momentum (Vlok and Schutte-Vlok, 2015; Coates Palgrave, 2002; Pooley, 1993; iNaturalist).