Home » REGIONS » Kouga » Crassula subaphylla var. subaphylla
Back to Category Overview
Total images in all categories: 11,506
Total number of hits on all images: 6,514,534 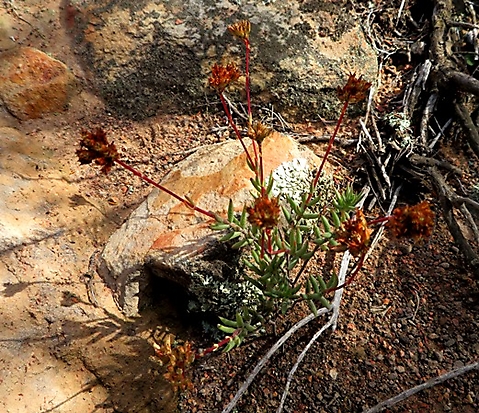 Encountered in a stony place in the Kouga Valley, this Crassula subaphylla var. subaphylla plant has decussate leaf-pairs. They are fairly close together on the few, branched stems but widely spaced on the flower peduncles grown from the stem-tips.

The flowers that cluster in flat-topped inflorescences before the end of summer and well above the plant’s leafy part, were long gone at the time of the May photo. Their brown, withered remains were still there for the photo, however, parading on long, red peduncles for the photo.