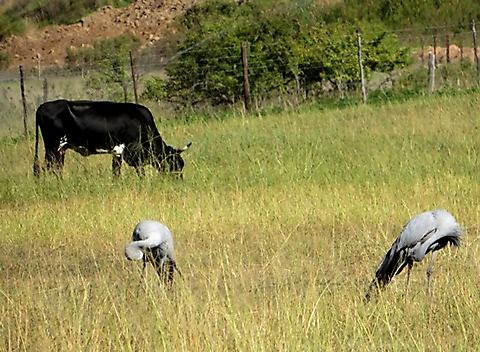 The blue crane, South Africa’s National Bird, is endangered. The serenity of the bucolic scene almost allows for the banning of such an unwelcome thought from the mind. The cumulative human impact on the environment is causing the bird’s natural habitat to be gradually reduced.

Fortunately, sightings of blue cranes, and sometimes their gawky chicks, bring pleasure to many people, some of whom make a difference in the protection of species. The ranks of conservation minded people are continually joined by more who become aware of the needs. Nations of such people are needed.

A peaceful meadow in the Kouga is the last place where someone would start thinking about environmental threats, and bigger worries like climate change. This is timeless country where things are still done slowly and nature speaks loudly enough to be respected by residents, whether their grandparents had lived here or not.

When the cranes aren’t breeding, the couples join many mates in flocks of about 30, while gatherings of up to 300 are occasionally still seen. Blue cranes are found in a broad, diagonal swathe across South Africa from the Western Cape to Mpumalanga and beyond the border in Namibia, Botswana and Zimbabwe.

They eat insects, reptiles, frogs and fish, but also grain, green shoots and grass seeds. Breeding happens in spring and summer, when up to three pinkish brown to brownish yellow eggs with dappling or blotching are laid in a scraped ground nest or sometimes on flat rock. Both birds do the hatching that takes 30 days; mostly the female.

There are 15 species of cranes worldwide, divided zoologically into three genera; all long-necked and long-legged. Cranes are the world’s tallest flying birds. They occur on all continents, except South America and Antarctica.

Some migrate over long distances, the blue crane of South Africa, Grus paradisea and previously Anthropoides paradiseus, doesn’t. Content with its grassland, cultivated fields and edges of karoid and marshy places, seasonal extremes are not incentive enough for leaving the permanent home.

In Russia, the operatic baritone, Dmitri Hvorostovsky, used to sing the famous song Zhuravli (The Cranes) composed by Yan Frenkel. The lyrics by Rasul Gamzatov tell of white cranes flying overhead at dusk in the mists, imagined as transformed Russian soldiers slain in a foreign land, flying home. A gap seen in the flock on the wing appears as a spot waiting and inviting to the viewer. Go listen (Maclean, 1993; Wikipedia, YouTube).