Home » REGIONS » Kouga » Schotia latifolia colourful pods
Back to Category Overview
Total images in all categories: 11,544
Total number of hits on all images: 6,625,941 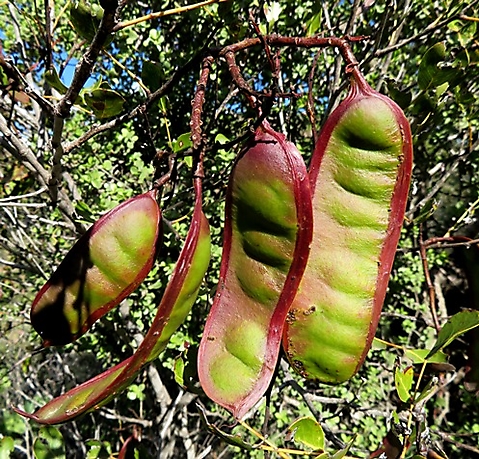 These bush boer-bean trees may be tall and slender along evergreen forest margins, or short and stout in arid scrub; their growth habit varying in the diverse conditions of its distribution. This ranges from arid Lowveld bushveld to Fish River scrub and rocky slopes in the Western Cape. (The tree is more fully described in the Schotia Album under Genera.)

The red-rimmed pods with indentations between the seeds were seen in the Kouga during May. The pendulous fruits hang on long, brown pedicels.

The seeds are eaten by monkeys, the seed arils by birds, the leaves browsed by game, while many insects and birds visit the flowers (Coates Palgrave, 2002; Schmidt, et al, 2002; Pooley, 1993; iNaturalist).