Home » PARKS AND GARDENS » Quiver Tree Forest » Gemini
Back to Category Overview
Total images in all categories: 12,086
Total number of hits on all images: 7,387,146 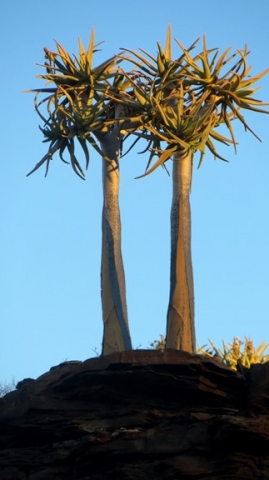 Almost identical in appearance, these “twins” posted on a rocky promontory of the quiver tree forest will increasingly entangle in their future. No horoscope is required to “see” that they are not blessed with inordinate amounts of personal space in all directions.

Would lightyear separation be nice? Some siblings think so.

Castor and Pollux of the Constellation of Gemini, described by Ptolemy in the second century AD face no such problems. Many “empty” lightyears separate them. Like these trees, the “two” Gemini stars are not identical: Castor consists of six dissimilar stars in a complex appearing like one, due to distance from earth, although sufficient lightyear separation prevents them from colliding. Pollux, the brighter one, is an orange giant, 18 lightyears closer to earth, flaunting its own exoplanet (a planet of a star outside the solar system).

The two Greek mythological characters for which these stars were named weren’t identical either, only half-brothers as often resulted in those days from the doings of the gods. Zeus, the father of Pollux, a boxer, acceded to his son’s request for elevating Castor, a horseman and warrior, to immortality. This landed them together in the Zodiac in modern times (Wikipedia; https://cosmicpursuits.com).