Home » PARKS AND GARDENS » Quiver Tree Forest » Home of tree aloes
Back to Category Overview
Total images in all categories: 12,086
Total number of hits on all images: 7,387,251 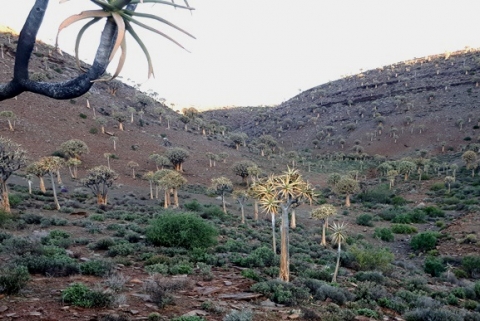 The valley between these hills is not marred by excessive water erosion in spite of low vegetation covering. The average rainfall received in winter is too low for that. The rare, periodic flash flood doesn’t seem to have depleted the topsoil much. The ground is comparatively rich in minerals, the soil alkaline or sweet, rather than acid or sour from leaching into acidification or low pH.

Aloe roots are terete, i.e. cylindrical or circular in cross-section, sometimes succulent and favouring well-drained soils. The roots are shallow, growing outwards, almost horizontally in the upper soil layers around the stem base; no taproot.

Aloidendron dichotomum, the quiver tree, lives in some of the driest parts of South Africa, often found among rocks on sunny slopes. It survives mild frost.

This Quiver Tree Forest includes some fair-sized trees in the deeper soil of the valley, but tall ones also abound on the steep slopes with fast run-off and on the brows of the hills. Even where the horizontal rocky slab ridges protrude above-ground and the soil under the trees cannot be deep, tree size is not stunted.

Count the number of small or young trees in sight and imagine what this scene will look like in 80 years, the average life expectancy of a quiver tree (Van Wyk and Smith, 2003; Coates Palgrave, 2002).