Home » PARKS AND GARDENS » Quiver Tree Forest » Fruit
Back to Category Overview
Total images in all categories: 12,086
Total number of hits on all images: 7,387,242 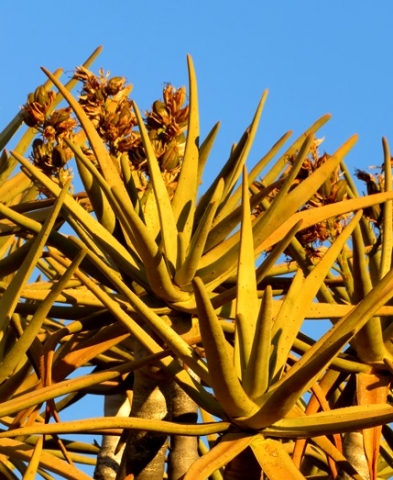 Bearing fruit crowns the lives of those characterised by successive generations. Other methods of delivering the next generation, like splitting in two are also used by some species, but the problem of individual transience faces all that lives, overcome for a time by their species.

Bearing abundant fruit is all the tree can do, within the constraints of its nature. Some plants flower only once or rarely, some animals take more than a year from conception to birth. Humans take a couple of decades to deliver functional adult offspring into its society. All such growth intervals are negligible in the bigger scheme of things.

Effort overcomes risk in billions of particular instances while never removing it; procreation is a percentage game. The lower percentage species are more likely to be affected by environmental threats. Genetics and environment forge a unique life cycle for every kind of being on earth (and possibly elsewhere), at both the individual and the species levels.

Some species are successful in being replaced by offspring species as life forever evolves and mutates, manifesting itself in replacement species for those that can face the environmental music of the moment. All wriggling and metabolising things on earth today are replacements of earlier species that crowned life for a (long) while during their bygone times.

People muse about where humanity is going, while evolving life as the solitary, collective driving force is not hesitant over such matters. Humanity is but a link in one of its chains, soon to be a historical link with something newer, more appropriate to demands of the day replacing it, or discontinued as an extinct branch of the tree of life that spreads inexorably from alien beginnings.