Home » PARKS AND GARDENS » Quiver Tree Forest » Flag of the future
Back to Category Overview
Total images in all categories: 9,976
Total number of hits on all images: 4,686,069

Flag of the future 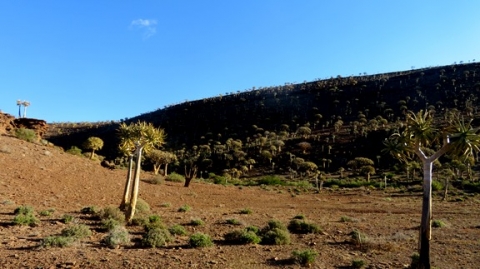 One day, far into the future, there will be a new dispensation on earth. Government will be integrated globally but rather quiet. The doers, all the trillions of them alive at any time, will be getting on with it by themselves: as best they can, as nature endows them, wherever they are, true to the life that drives all and always becomes.

There will be people, yes! But far fewer than in the distant past before their climatic Armageddon.

Strangely subdued they will be, rather inactive at the Ubiquitous United Nations where this Earth Flag, one of the numerous versions of our Tricolor of Life with Liberties, will fly forever in clean air. For universal liberty under the coexistence principle will in that future time be valued by all species, inclusive of all species.

Although we now all still consume each other, as liberties have to be taken within reason to live, here in this better world that eventually arrived for the benefit of all, there is peace among all; and life is beautiful… for all that evolve.

The liberties regarding the flag mean it has the three key colours but they change naturally and continually to remain beautiful and true to nature. The colours represent the sky, the earth and all those living on it; nothing else was found to be needed after all as far as symbols go.

The living middle colour band includes all the plants, the animals plus what have you, because collectively we’re surprising, a funny lot although we don't boast, we just do. We all kill to live, naturally, never for kicks, as the people in their old mindset used to do. Evolution does not have a Constitutional Court for faulty species, it wipes out mistakes in nature's traditional way, death coming early when it serves the greater good... a solution people found weird before they learnt to embrace it as part of life. Our inbetween colour between earth and sky emphasises the unity of all the living, the value we ascribe to ourselves jointly and severally but above all, to life.

We’re a confident bunch on earth these days although we have to be vigilant to survive, valuing our flag, our freedom and the earth mother. The Ubiquitous United Nations doesn’t even have a building but every living thing reaches it whenever they travel, wherever they go.

Therefore, our flag changes colour and shape, naturally, as it is raised forever in the sky above, laid on the ground below and encompassing us all, happy in the real world. This flag captures the ever-changing scenery of our world, the symbol is our life, our life the symbol.

There was a lot of soul-searching in our past, the unification history of all species nations was a struggle, but simplification without exclusion saved the day.

The survival trilogy of life itself embodied by our flag is not only of paramount importance to all the living, it is the solution to a magnanimous civilisation at last. Life is greater than anything alive, let it keep generating biodiversity as long as the world may last!

The people that weren’t wiped out by their self-made cataclysm during those dark days were initially in two minds about joining. Having lost their competitive edge against everyone else, hardship refined their minds so that today they are a much easier lot to get on with in the collective of species nations. They still do funny things in their nooks because of this brain thing nature gave them. They behave acceptably to all of us although they eat somebody now and then as everyone must.

And they’re a lot better than the crowd that left for the moon and Mars; inveterate specieists, all of those! Rumour has it that those people only grow other species under controlled conditions as food, medicine and for other direct usage.

They even have hilarious little gardens and zoos for “aesthetic, educational and spiritual” reasons. For the rest, they’re all alone, playing with themselves until the Biodiversity Utopia catches up with them. Let them. And let it.