Home » PARKS AND GARDENS » Quiver Tree Forest » Eyes and thoughts
Back to Category Overview
Total images in all categories: 11,037
Total number of hits on all images: 5,688,262 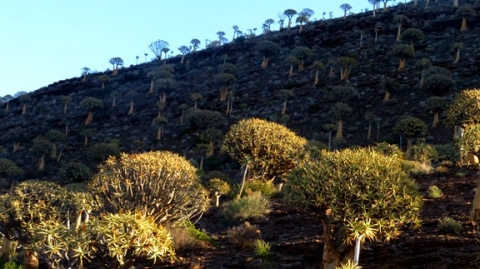 Somebody is watching you! Toy with the feeling. The forest is open but not that open. Anything with eyes may be hiding almost anywhere. In the dead quiet the sensation of being observed grows to obsession. Practice the feeling enough and it peaks in paranoia.

Serene life close to nature is trouble-free until thoughts churn things up in a wilful mind. Where could he be hiding? If it were a woman, she would show herself when she’s ready. And how would that be?

But, no! Evil intent must be assumed, spelling danger. It will be a man and nothing good awaits when he appears. It will happen suddenly, the direction totally unexpected; and he will be armed. So turn around. Gender stereotypes of human behaviour won’t wash from the social system any time soon.

While all this goes on, there is a pretty forest remaining unadmired. Just look at it and get a grip. Travelling a thousand miles to see the prime sight and worry about the parked car? That’s step one on the road to being disturbed. The stillness of the forest elicits confrontation with the dark doubts living in the cellar of thoughts usually under lock and key.

There is no mental disorder that does not pay its fleeting visit to every stable mind in nanodisaster. For the mind is an open-ended river of unedited thoughts, chosen and discarded in the moment, soon forgotten but for the few with muddy feet.

Replete with cross-road options for matching what happens outside the head, the mind thinks it is responsible for the decisions that make the life. Like coming to see this place sooner rather than later, wearing the correct thinking cap for the occasion.