Home » PARKS AND GARDENS » Quiver Tree Forest » Illusory withdrawal
Back to Category Overview
Total images in all categories: 10,856
Total number of hits on all images: 5,516,182 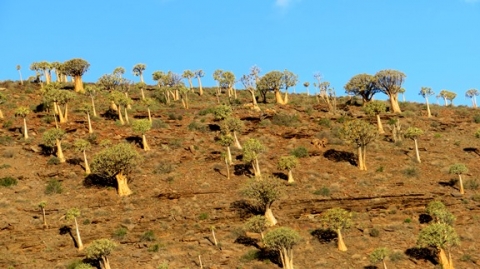 Check it out! They’re retreating, imperceptibly hurrying over the hill. Or the sun is pushing them against the hill. What magnet is attractive on the other side?

The camera produced this strange effect of (about) uniform tree inclination towards the hilltop in the photo. No such leanings had been noticed when visiting the forest or on the other photos taken, apart from the common deviation of some stems from the perfectly erect but in random directions.

1. physical illusions caused by the environment directly, e.g. by the optical properties of water,

2. physiological illusions that arise in the eye or the visual pathway, like the effects of excessive stimulation or afterimages and

Pathological visual hallucinations that also exist are still to be added, something different.

These phenomena have from ancient times brought doubt as to how much we can trust our perception. If our eyes lie to us, can we really know the world? The range of causes that can leave us with fake concepts regarding what we learn compounds the problem.

And then the mind with its vagaries add delusions to the confusion in unseen ways! Philosophy has much to say about all this as well as wisdom from several branches of science. Some even said that all beliefs are true but not necessarily beneficial!

Real comfort regarding all this cannot be offered here, could never be comprehensive, but those trees are really there, were really there, might be there when you visit, I think I saw them, I am sure I saw them, they were standing still, generally upright and the sun was also there, check the photos!

If none of this is true, aren’t we having a ball with the mammoth illusion that sustains a bubble around 7,5 billion people who aren’t really there?