Home » PARKS AND GARDENS » Quiver Tree Forest » Greener patch
Back to Category Overview
Total images in all categories: 10,856
Total number of hits on all images: 5,516,166 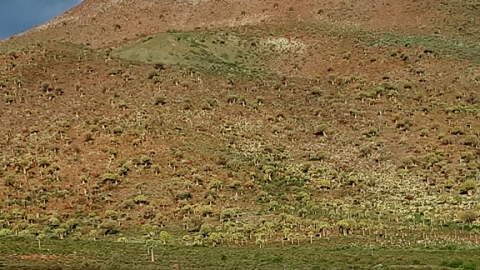 Not all of the Quiver Tree Forest near Nieuwoudtville looks as if free ranging goats have recently finished off the palatable filler vegetation among the trees. Green ground cover in this forest is both seasonal and partial. Some parts have variably sparse shrublets, while elsewhere grasses or other annual flowering plants know their place as subdued minorities, disappearing at times. Fair sized patches have at least seasonally no covering, only rocks and sand apart from the spaced gathering of Aloidendron dichotomum statues.

Conditions favouring the proliferation of a particular species to occupy only a particular area in a neatly delineated monospecies forest is interesting. The abrupt discontinuation, exclusion from the land around for no visible reason, poses a question. Mysterious to early tribes suspecting magic, or a baffling phenomenon to resident farmers with limited scientific understanding, it constitutes a challenge even for experts requiring methodical investigation.

Factors including soil type, slope, moisture and more may form part of forest delineation as well as of the changes the forest undergoes. An advancing young forest may have faced events such as climatic changes arresting progress by temperature and rainfall patterns. Bare patches are present, maybe caused by tree deaths and no new plants growing due to unfavourable conditions.

There is a second notable quiver tree forest of between 4000 and 5000 trees near Kenhardt in the Northern Cape, on dolerite slopes of brown sand and dark rocks. Yet another one comprising 250 of these trees also growing on dolerite near Keetmanshoop in Namibia indicates a tendency for the overall package of suitable factors to recur in the general region. Whether they are currently expanding or declining remains a question. The latter forest is on a farm where visitors have use of a rest camp.