Home » PARKS AND GARDENS » Quiver Tree Forest » Facing the sun once a day
Back to Category Overview
Total images in all categories: 12,086
Total number of hits on all images: 7,387,234

Facing the sun once a day 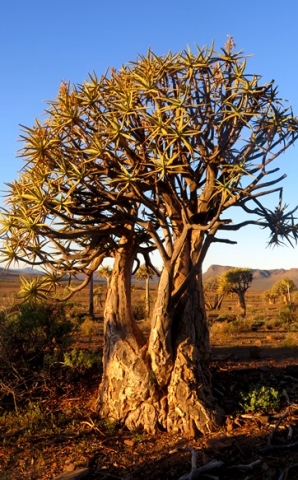 When philosophers in olden times believed that plants were passive, flower movement facing the sun was thought to be caused by lateral moisture loss from the sun’s rays, a mechanical effect. Heliotropism is derived from the Greek words helios meaning the sun and tropos meaning a turn, referring to this turning to the sun.

The phenomenon became scientifically recognised as a plant growth reaction from modern time cellular and subcellular studies. The hormone causing the growth direction affected by the sun is known as auxin, from a Greek word meaning to increase. This hormone increases cell length especially near stem-tips. Auxin multiplies in or moves to the shaded side, causing elongation and bending the organ the opposite way.

The name change to phototropism came when plant organs were found to respond similarly to artificial light, in the absence of sunlight. Facing the sun may in nature have evolved to benefit and attract pollinators, grow pollen better or contribute to seed development. Other theories involve plant temperature management.

The phenomenon is not always manifested daily but seasonally, the turning sometimes in the general direction of the sun while not quite facing it, depending on species and environment. Some plants also display leaf heliotropism or phototropism, not all plants responding equally to the time of day, like favouring morning versus midday. Leaf and flower phototropism do not necessarily affect the same plant species.

The quiver tree forest has so many trees bearing rounded crowns or symmetric leaf rosette domes without inclination that this tree should be considered in terms of the damage caused by unknown sources on its shady side. Any effect of tropism in these hard tissue, woody stems and their rosettes can be considered minimal or absent (Capon, 2005; Wikipedia).