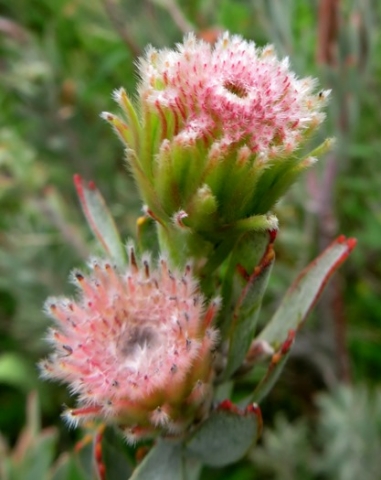 When the Leucospermum reflexum var. reflexum flowerhead begins to grow, the floral bracts dominate, even appearing to be the main floral item itself, not merely the forerunner of greater complexity and wondrous things to come.

Flat-topped and only slightly broadening upwards, the numerous bracts are at this stage straight, tapering to acute tips. They are very hairy along their margins near the tips, the overall effect a woolly top. Tip colouring is already becoming red, the lower parts a fresh to pale green.

The almost erect leaves around the young heads are blue-grey, their margins red and toothed at the tips. Colour contrast between flowerheads and upper leaf parts is dramatic at this stage, the leaves everything but lagging in flamboyance (Manning, 2009; Bond and Goldblatt, 1984; http://pza.sanbi.org).