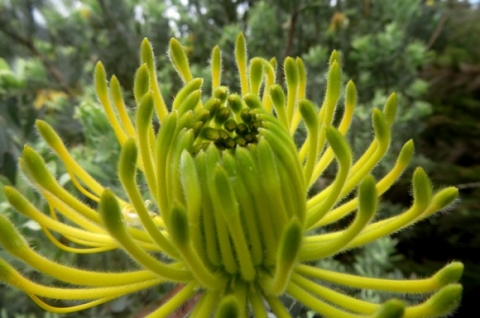 The young Leucospermum reflexum var. luteum flowerhead has so far only spread the outer perianths of its many-flowered head. The shorter ones cohering in the centre will open last.

The first signs of styles bursting from the seams of their perianth covers by elongating forcefully enough to have their way, have appeared below the outer perianths on the left in picture.

The rest patiently await their moment, swan-like and graceful, although lemon-yellow necks and green, eyeless heads don’t make it in colour to swan-like semblance. Their shapes do, to some extent, depending on the warp in observer imagination (Manning, 2009; Bond and Goldblatt, 1984; http://pza.sanbi.org).