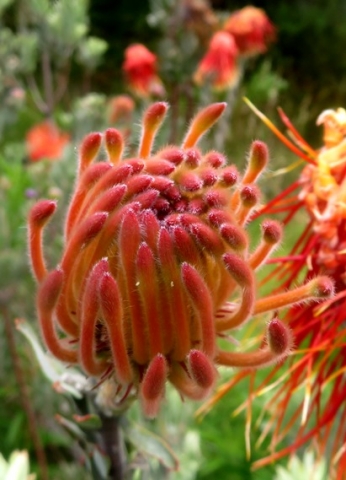 A shapely, upside down leg-multitude can only belong to some spidery being from a very outlandish place. Delicately adorned with comely, soft-textured hairs, long and sparse, others simultaneously in the same places seeming short and velvety, these legs are fit for a godly presence from supernature. One clearly fit and eligible to rule the Amazon Arachnoids or some such mythical empire, for a season or so. For who knows how long such things live or what they might do to coronaviruses?

The colour nuances on the closed perianths are far subtler and more manifold than on the starkly bright, hairless styles of the open flowers.

The curvature in these perianths has a soft sensitivity lost in the exposed styles, now warrior women, blatant and rigid. Yet they emerged from such delicate beginnings (Manning, 2009; Bond and Goldblatt, 1984; http://pza.sanbi.org).