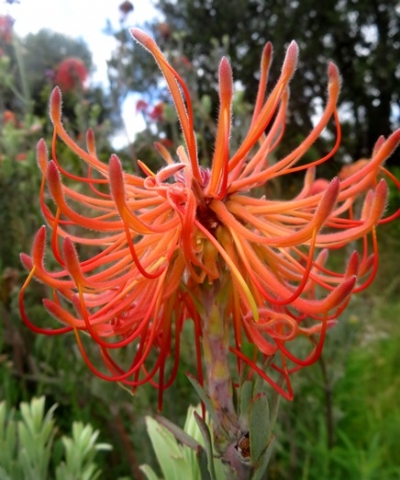 Imminent opening of the individual florets in a Leucospermum reflexum var. reflexum flowerhead is heralded by the spreading of the florets from their initial dense cluster.

The styles start bulging out of the perianth coverings within which they started off. They simply grow too long and too strongly, splitting a perianth tube seam to alleviate pressure. Then only the overly long, hairless style limb, not yet the tip, protrudes from its hairy cover.

The perianth tip release is delayed. It is the crux of the procreative matter. In there the pollen ripens in the anthers, early release to be avoided. The moment arrives when style elongation bursts the perianth seams and the pollen presenter captivity is over.

During that final break in the perianth segments, the pollen is deposited from anther to style tip. The perianth cover rolls away in spent segments and the pollen presenter, in unison with many mates for maximum effect, sticks out rigidly, fully exposed and well loaded.

Its parade ground stance is, however, a ruse, a procreative ambush. The whole charade happens solely for offloading pollen when touched by something hungry. The bird or insect intent upon food is oblivious of the sex shop antics of its host.

The transporter is very likely to convey pollen to the next flower, for each offers only enough pollen and nectar of suitable quality for ensuring that the service provider wants more of the same (Manning, 2009; Bond and Goldblatt, 1984; http://pza.sanbi.org).