Home » GENERA I-L » Leucospermum » Leucospermum rodolentum using its opportunities
Back to Category Overview
Total images in all categories: 9,840
Total number of hits on all images: 4,471,814 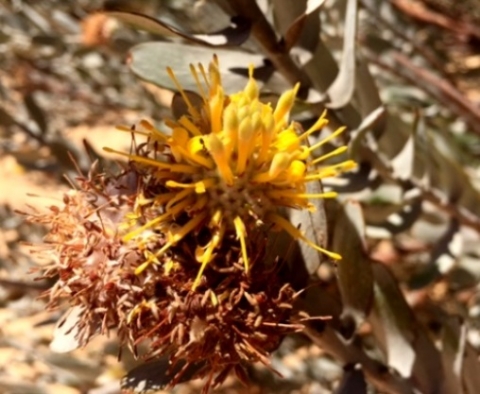 The last closed Leucospermum rodolentum perianths or individual flowers of the younger flowerhead in picture are about to open. Holding their flat-topped orientation to the last, the free pollen presenters don't waste time in angling out to spread into globular orientation as they approach maturity.

The god of genetic trial and error has statistically determined (without a single calculation) that this stance represents the optimal marketing strategy for best pollination results. Animistic gods of nature are so magically wonderful until science arrives to spoil their fun.

The lex parsimoniae, an ostensibly small gift bestowed by a man of the cloth, the Franciscan friar, William of Occam, brought light in dark ages for speeding up growth in the body of science.

Fortunately, it’s only human understanding that moves on when Occam’s razor demolishes a redundant tenet for replacement by a more parsimonious one. For the rule remains: prefer the explanation of a phenomenon that requires the smallest assumptions.

Nature remains as beautiful as ever, whether understood or only admired. The excitement of discovery may, however, even enhance its allure in the eyes of the learning observer.

Science is after all a perennial work in progress, a product of humanity that is itself part of nature. Thus science is a quest full of rewards, hopefully to last as long as people, but without a final destination (Wikipedia).