Home » GENERA I-L » Leucospermum » Leucospermum rodolentum flowerhead
Back to Category Overview
Total images in all categories: 9,840
Total number of hits on all images: 4,471,486 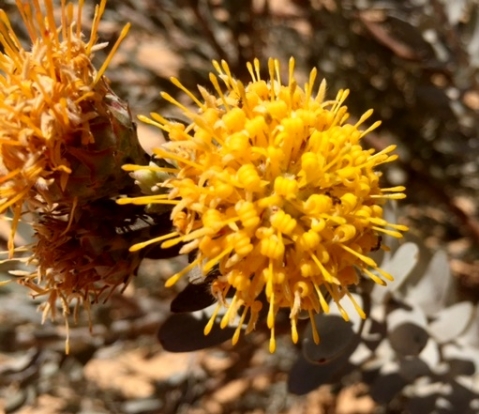 The yellow flowerhead of Leucospermum rodolentum is small, becoming about 3 cm in diameter, produced at a branch tip. The usually straight styles of open flowers become from 1.5 cm to 2,5 cm long.

Three perianth segments of each open flower are curved back and coiled up on one side of the style, the fourth one opposite them. The straight styles are club-shaped, the pollen presenter at the tip, later to become the stigma.

The flowers are sweetly scented; one of the common names for this species being rose-scented pincushion. The specific name, rodolentum, may well refer to the fragrance of this species. The Latin verb redolere means to smell strongly, while the Greek word rhodon means rose. Rodomel is a juice of roses mixed with honey, while rodolia is a genus of ladybird beetles.

The rose scent seems to be the best clue as to the origin of the name. There may be a complication from the description in Coates Palgrave (2002): The plant was grown in England as long ago as the beginning of the nineteenth century, apparently under the name rose-centred leucospermum.