Home » GENERA I-L » Leucospermum » Leucospermum rodolentum, the young and the old
Back to Category Overview
Total images in all categories: 9,840
Total number of hits on all images: 4,471,890

Leucospermum rodolentum, the young and the old 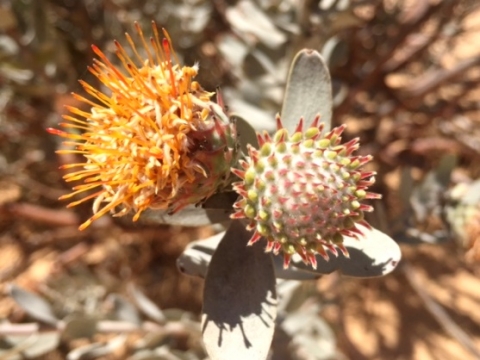 The early budding stage of a Leucospermum rodolentum flowerhead, compared to the old one next to it, shows very different floral parts dominating.

Around the perimeter of the young growth the narrow, pointed and hard involucral bracts overlap and bend outwards, showing purplish red inner surfaces and woolly tips. Near the centre the bracts are still small, curving in on a sea of white velvet.

The tips of perianth beginnings that will soon grow tall and straight, are visible near the perimeter. Perianths are the individual flowers, the thin cylinders standing together inside the flowerhead until their four outer segments break open and release the straight style to reach its full length. At this stage they are short, mere fluff balls, greenish yellow in colour, each inside its bract.

The old flowerhead has straight, orange-tipped yellow styles over an unruly floor of collapsed perianth segments. These curled up segments below are of little importance after yielding the pollen inside their tips onto the pollen presenters, other than being a cover over developing seeds in the ovaries. The styles remain standing here, now busy with feminine commitments and no longer concerned with distributing pollen to insects and birds.

Note the rounded leaf tips in this photo, lacking the three to six teeth normally associated with the leaves of this plant. The shrub in picture does have some leaves elsewhere with at least four teeth (Manning, 2009; Le Roux, et al, 2005; Manning and Goldblatt, 1996; Coates Palgrave, 2002; iSpot).