Home » GENERA I-L » Leucospermum » Leucospermum rodolentum habitat
Back to Category Overview
Total images in all categories: 9,840
Total number of hits on all images: 4,471,775 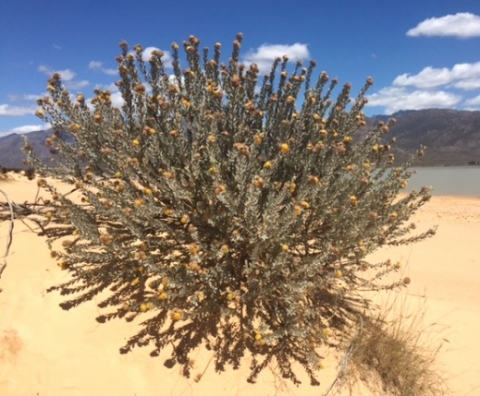 The habitat of Leucospermum rodolentum is coastal sandy flats and lower slopes near the sea on the west coast and northwards to the Namaqualand coastal plain. The plant grows in habitats ranging from dry fynbos and coastal scrub to bare sand.

The species is considered to be vulnerable in its habitat early in the twenty first century. Habitat loss due to agriculture and groundwater extraction have contributed to this precarious situation. Three quarters of the plant’s distribution range is also invaded by alien plant species (Manning, 2009; Le Roux, et al, 2005; Manning and Goldblatt, 1996; iSpot; www.redlist.sanbi.org).