Home » GENERA I-L » Leucospermum » Leucospermum tomentosum flowerhead
Back to Category Overview
Total images in all categories: 9,840
Total number of hits on all images: 4,471,638 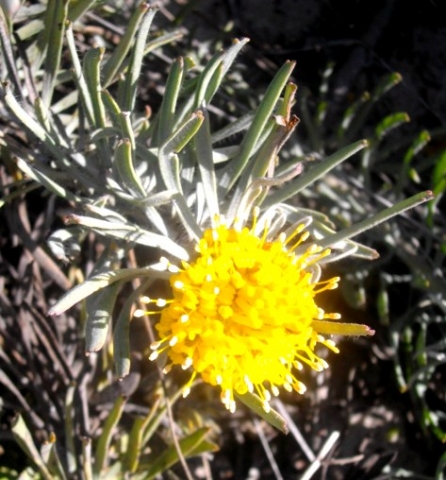 Blooming of Leucospermum tomentosum commences in midwinter and continues through spring. The deep yellow of the flowerhead consists of the segments of the perianth tubes that have here already released the white-tipped pollen presenters on their yellow styles.

The long and narrow, oblong leaves are hairy and grey with upturned margins. The teeth at leaf tips, two to four of them, give these leaf tips an irregular, truncated appearance.

Leucospermum flowerheads or pincushions, as they are commonly known, are often referred to in Afrikaans as luisiesbosse (little lice bushes). This does not refer to the flowerhead, but to the appearance of the seeds not yet formed on the plant. Every seed is covered by a louse-resembling (or tick-resembling) elaiosome, which is a fruity appendage, eaten (in the case of this species) by ants. The seeds are carried by the ants to their nests for the sake of the attached foodstuff, thereby fulfilling the need for seed dispersal. A rare case of anything called louse being happily carried into the home!