Home » GENERA I-L » Leucospermum » Leucospermum tomentosum in flower
Back to Category Overview
Total images in all categories: 9,840
Total number of hits on all images: 4,471,573 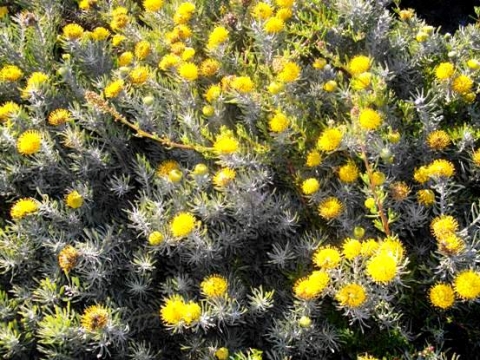 Leucospermum tomentosum shrubs bear many deep-yellow flowerheads in clusters at the height of its blooming season. At this time the yellow-grey contrast between flowers and leaves makes these plants conspicuous residents among the west coast scrub.

The flowerheads in picture range in developmental stage from unopened flowers, fully opened ones to some already fading into brown. Flowerheads occur solitary or in small clusters at branch tips. The individual perianths in each flowerhead start opening from the outer ones first, gradually reducing the erect bunch of buds in the centre as the flowerhead matures.

The rounded shrub, described as sub-erect, has some central branches that are erect and tall, while the outer ones spread or sprawl. This plant was photographed at Grotto Bay during August (Manning and Goldblatt, 1996).