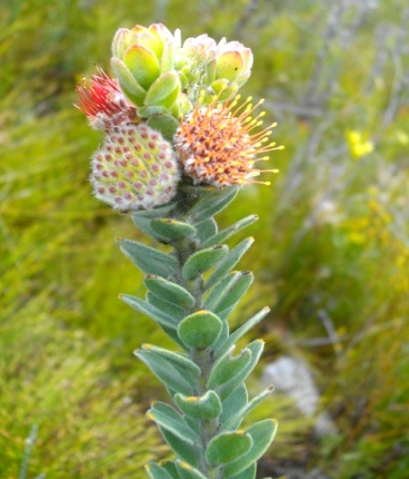 The flowerheads of Leucospermum truncatulum are presented with no stalks (sessile) in a small cluster at a stem tip. In this photo they appear amid some new branches also sprouting. The youngest capitulum or flowerhead has woolly buds still closed in an almost flat-topped structure. The outer buds show an ample endowment of whitish hairs, the inner ones are purplish at the tips, yellow-green below.

The other visible capitula have progressed further; the blooming season that started already at the end of winter is nearing its end in December when this photo was taken in Fernkloof. The capitulum on the right still has the yellow pollen presenters on top of their erect styles; the far left (older) one has faded to red styles that have lost their globose tips already (Matthews and Carter, 1993; Manning, 2007).