Home » GENERA I-L » Leucospermum » Leucospermum truncatulum flowerheads
Back to Category Overview
Total images in all categories: 9,840
Total number of hits on all images: 4,471,512 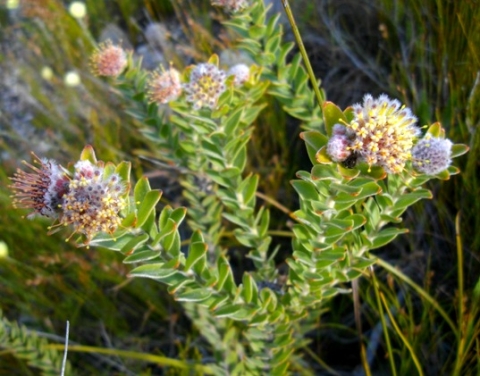 Much colour variation characterise the prolific Leucospermum truncatulum flowerheads as they are presented in small clusters at stem tips over their about five month blooming season. This enhances the chances for seed production, ensuring that some flowers may mature at times when the vicissitudes of climate are favourable, Cape weather being what it is.

The youngest budding flowerheads are pink with much white wool, while a dark grey colour appears when the individual bud tips emerge to form a slightly expanding cone shaped structure with a flat top. On an open flowerhead, pale yellow styles with yellow pinhead tips protrude like antennas above the recurving ribbon-like perianth lobes that lie like four curved yellow petals around the erect shafts.

Some flowerheads in this photo show some of these stages coexisting in the same heads. Later on maturity of the flowerhead is announced by a reddening of the styles, telling pollinators to seek elsewhere: the business for them is now over, having turned to fruiting and seed production.