Home » GENERA I-L » Leucospermum » Leucospermum rodolentum
Back to Category Overview
Total images in all categories: 9,840
Total number of hits on all images: 4,461,742 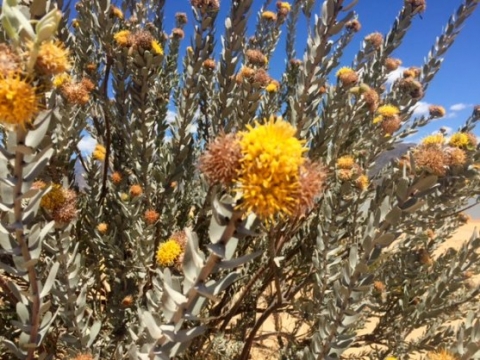 Leucospermum rodolentum, the sandveld pincushion or in Afrikaans beesbos (cattle bush) or klipboom (stone tree), is an erect or spreading shrub reaching 3 m in height.

Technically evergreen while grey in appearance, the long stems branch low down from a short, stout single stem or trunk with smooth, grey bark; the plant being a reseeder. The branches usually reach down to the ground, obscuring the stem.

The shrubs live for about 20 years. This is one of the pincushions that received a South African Tree List number (No. 83).

The species distribution from near the Cape Peninsula to the Namaqualand coastal plain makes this plant a South Africa endemic of the Western Cape and (the south of) the Northern Cape. A separate population of L. rodolentum grows near Worcester where some dune-like, sandy slopes occur. Photos of the plant presented in this Album were taken in November near the waterside of the Quaggaskloof Dam near Worcester (Manning, 2009; Le Roux, et al, 2005; Manning and Goldblatt, 1996; Coates Palgrave, 2002; iSpot).