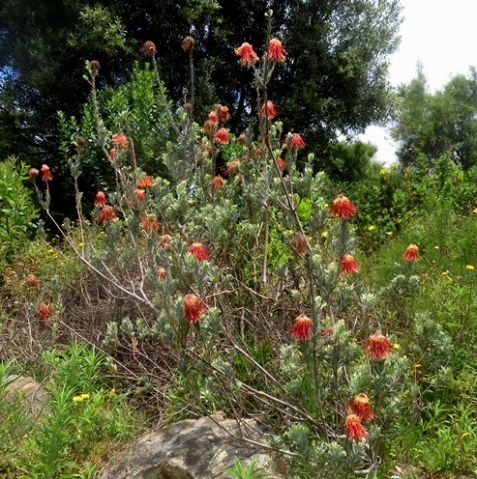 Leucospermum reflexum var. reflexum, the red-flowering variety of the rocket pincushion or in Afrikaans the perdekop (horse head), is a large, rounded shrub, grey-leaved and hairy, reaching heights to 3 m, occasionally larger. It does, however, make it into the small tree ranks having the SA Tree List number of 85.2.

Hundreds of coral or tomato-red flowerheads among the silvery grey leaves may adorn a mature bush at the peak of bloomtime, usually in spring.

The distribution of this variety is in parts of the Cederberg mountains between Wuppertal and Pakhuis.

The habitat is moist places, streambanks and seepages of the generally arid and hot sandstone fynbos found on upper slopes in the region. L. reflexum as a species is considered to be near threatened in its habitat early in the twenty first century due to rooibos farming and drought; this variety with it (Manning, 2009; Coates Palgrave, 2002; Bond and Goldblatt, 1984; http://pza.sanbi.org; http://redlist.sanbi.org).