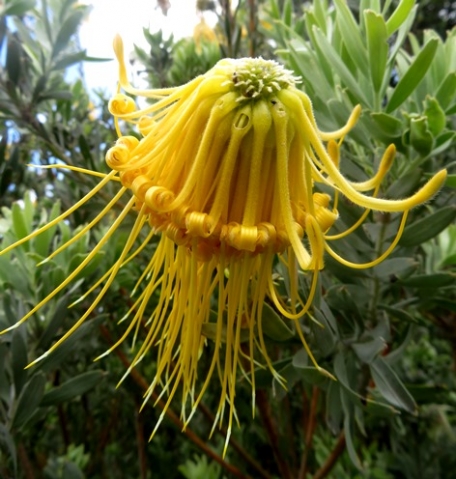 When the Leucospermum reflexum var. luteum flowerhead is open, the reflexed styles point down and angle out, more or less curved, seldom straight. Their tips, the pollen presenters, are whitish.

These pollen presenters, the female stigmas when ripe and reverted to a feminine function, serve the male purpose during their youth as pollen distribution points. Gender issues across all the living species are so often full of surprises, yet always singularly purposeful and inventive.

The pollen presenter is ringed where it joins the style, marking the point of difference from the style in appearance; the ring not added ceremoniously in this family.

The styles of the open flowerhead become up to 7,5 cm long. The perianths are not discarded in the L. reflexum species as disdainfully as many other pincushions do: They serve as neat little skirts with margins ostentatiously curled over the upper style parts.

The last few unopened perianths in picture are still half-heartedly in the up position. Their styles are sagging low, nearing the escape moment when they will go down into the company of the older styles and the flowerhead will be fully open.

The curly crown on top of the flowerhead shows bracts that never had perianths. These heads run out of productive and eventually reproductive steam, growing more bracts than perianths.

L. reflexum flowerheads may be up to 10 cm long, from the bract curls at the top to the pollen presenter tips below; also 10 cm wide from the last styles to gain maturity (Manning, 2009; Coates Palgrave, 2002; Bond and Goldblatt, 1984; http://pza.sanbi.org).