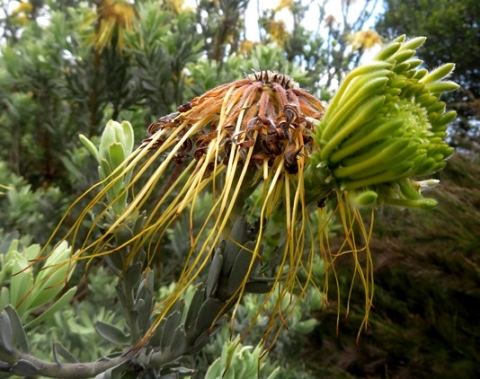 Young and old Leucospermum reflexum var. luteum flowerheads juxtaposed and stalked here, remind that a few heads, up to about five, may be borne per stem-tip. Successive blooms keep the flourishing bush covered continuously through much of its long flowering season from late winter to early summer.

The closed perianths of the young flowerhead are cream-green to slightly yellow with all four segments intact, around the concealed, still short styles. In the old head the perianth segments are mainly black and curled up. Its styles, initially so well concealed in their young perianth covers, are now bare and double the length, drooping and pale yellow with none of the parade-ground stiffness of their younger days.

The central bract patches on both flowerheads remain, yellow-green and soft on the young head, brown-black and hard on the old one. The flowerhead lasts florally for about a week (Manning, 2009; Bond and Goldblatt, 1984; http://pza.sanbi.org).