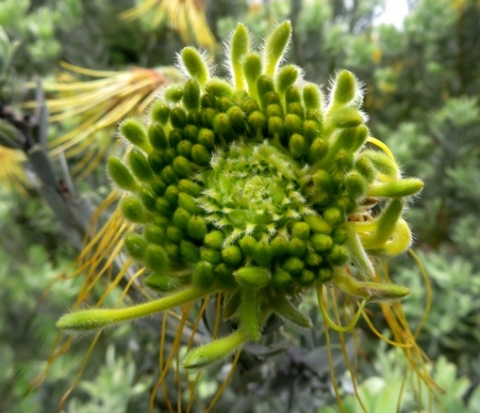 Seen from the top, the Leucospermum reflexum var. luteum flowerhead shows a patch of short, pointed, hair-fringed bracts in its centre where no florets have grown among them. Bracts are present all over the head, the outer ones hidden, subtending the young perianths or flowers.

The perianth tips in picture are still mostly bunched like matchsticks but yellow-green with fine lines where the perianth segments will split as the florets open.

Readiness for opening is highest in the outer perianths. They spread in their perianth covers before only their freed, naked styles elongate and point down around the head (Manning, 2009; Bond and Goldblatt, 1984; http://pza.sanbi.org).