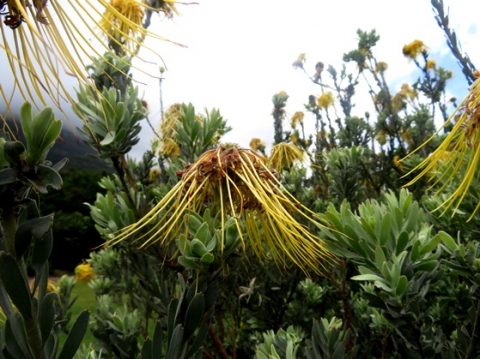 When flowering is done, the leftovers of a Leucospermum reflexum var. luteum flowerhead is a mass of down-turned styles forming a broad brimmed hat-like contraption around the head.

The fruit is an achene released ripe from the head within a couple of months after flowering. Fruit dispersal is done by ants that eat the fleshy elaiosome from the nut in their nests.

Young-leaved stems start to grow from axils near the tip after flowering (Manning, 2009; Bond and Goldblatt, 1984; http://pza.sanbi.org).