Home » TYPES » Bulbs » Pauridia capensis
Back to Category Overview
Total images in all categories: 11,238
Total number of hits on all images: 5,948,309 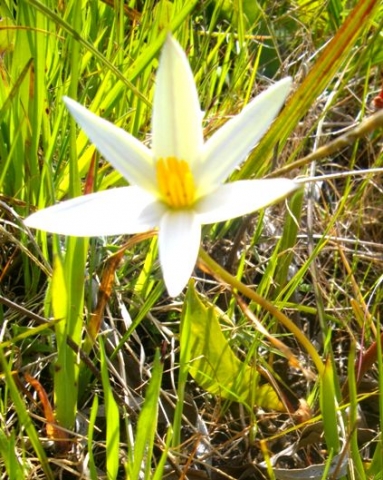 This creamy white Pauridia flower was adorning the grass in September at Onrus, not far from the sea.

Pauridia capensis, previously Spiloxene capensis, sometimes has an iridescent dark centre, but not always. It produces yellow, pink or white flowers. The other species with white flowers growing in this area is S. aquatica, which looks different and won’t make it in such a dry patch as where this plant was found. So, best guess is P. capensis.

The peacock flower, as P. capensis is commonly known on account of the iridescent centre absent here, is a variable species that bears four to twelve narrow basal leaves, Y-shaped in section.

The solitary flowers are borne on hollow stalks. Flower diameter varies between 1 cm to 1,5 cm. The six anthers are yellow, erect and cohering in the photo. Each flower has one large leaf-like bract at its base.

The species distribution is in the Northern, Western and Eastern Cape, ranging from southern Namaqualand to Humansdorp.

The variable habitat includes seasonally moist flats in granitic sandy as well as clayey soils. The plant is not considered to be threatened in its habitat early in the twenty first century (Bean and Johns, 2005; Manning, 2007; iSpot; http://redlist.sanbi.org).