Home » TYPES » Bulbs » Pauridia serrata subsp. albiflora
Back to Category Overview
Total images in all categories: 12,087
Total number of hits on all images: 7,392,918 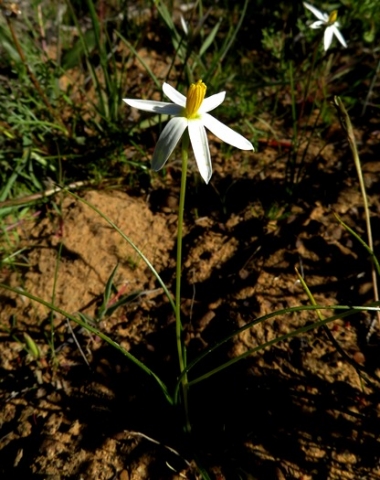 Pauridia serrata subsp. albiflora is a cormous perennial growing annual above-ground parts to heights reaching 20 cm. The corm has a covering of netted tunics, the roots below twisted.

Several dark green, grass-like leaves are grown. They are narrow, shiny, hairless and channelled with small marginal teeth. The specific name, serrata, may have been chosen on account of the serrated leaf margins.

This subspecies is found in the south of the Northern Cape around Nieuwoudtville and southwards east of Van Rhynsdorp. The photo was taken on the flower farm, Matjiesfontein, near Nieuwoudtville.

The habitat is lower slopes and seasonally damp places in clay and sandy soils. The subspecies is not considered to be threatened in its habitat early in the twenty first century.

The other subspecies, subsp. serrata, bears yellow flowers and has a bigger geographical distribution (Manning, 2007; Manning and Goldblatt, 1997; Bond and Goldblatt, 1984; iNaturalist; http://redlist.sanbi.org).