Home » TYPES » Bulbs » Pillansia templemannii
Back to Category Overview
Total images in all categories: 8,963
Total number of hits on all images: 3,974,002 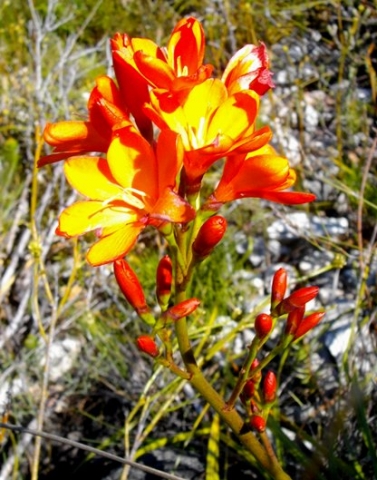 Pillansia templemannii is a cormous evergreen reaching 1,2 m. The corm is somewhat flattened rather than spherical, covered in a fibrous tunic. There is only one species in this genus; an earlier name for the species was Tritonia templemannii.

The plant grows a few hairless, strap-shaped leaves that become 1 cm wide. The fibrous leaf has a spiral twist and no midrib.

The bright orange flowers grow in a branched panicle on a cylindrical stem that has one or two smaller stem-leaves. Each radially symmetric flower is subtended by a firm leathery bract. The flower is bowl-shaped, the tepals united in a short tube, spreading in their upper parts. The exserted style is divided into three slender branches split or notched at their tips.

The long-lasting flower becomes about 1 cm in diameter. Pollination is done by bees and monkey-beetles. Flowering happens in early spring, usually after fire or on land where the vegetation is kept short.

The species distribution is small, in the Caledon, Kogelberg and Hermanus region where the plants are found on lower sandstone slopes and flats. Large stands of these plants are sometimes seen. The species is not considered to be threatened in its habitat early in the twenty first century (Bean and Johns, 2005; Manning, 2007; iSpot; www.redlist.sanbi.org).