Home » TYPES » Bulbs » Pancratium tenuifolium filament cup
Back to Category Overview
Total images in all categories: 11,894
Total number of hits on all images: 7,136,492 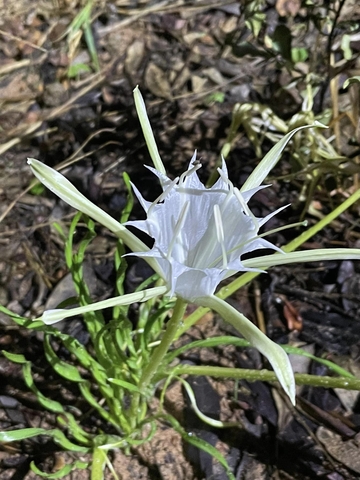 Pancratium tenuifolium flowers spread their narrow tepals widely like a six-spoke wheel. The tepals become about 10 cm long. In lily-family terms they constitute the corolla that normally represents the essence of what is floral in a plant.

Not in the Pancratium genus, although it forms part of the Amaryllidaceae family, at first glance an unlikely link. (There is only one Pancratium species in southern Africa, more around the Mediterranean and in Asia.)

Here the six stamens form a cup of the six filament bases, the lower stalk parts of the stamens. This diaphanous cup, a false corona, presides over the flower centre, as effectively as several other, different floral parts impress and hold the attention in many flowering species, making sure that flowers the world over remain a cause of wonderment to people. The preferred parties as far as attention and adulation are concerned from the floral point of view, are only those parties that eat from flowers… and thereby pollinate them.

The rim of the cup seen here has twelve acutely pointed and outwardly pointing tips, spiky-looking enough to convey the message that this is not a drinking cup. The cup rim also has six filament tops, emerging from every second valley or sinus of the rim, the marginal dips all around the cup edge.

The thread-like filament upper parts angle inward over the cup, ending in the creamy, about oblong anthers. This is where pollinators can meet pollen, deliberately or inadvertently. Stamen positioning in this flower resembles the decorations seen on temporary walls at carnivals venues.

The style is visible here but not commanding centre stage: long and thin, it protrudes askew over the right side of the cup, as if this party has continued all through the night.