Home » TYPES » Bulbs » Pancratium tenuifolium
Back to Category Overview
Total images in all categories: 11,921
Total number of hits on all images: 7,169,739 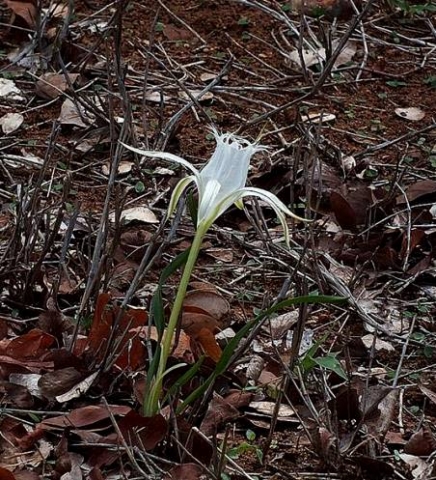 Pancratium tenuifolium is a deciduous, summer-growing, bulbous geophyte reaching heights from 15 cm to 40 cm. The globose bulb in a dark brown tunic is about 2,5 cm in diameter, ending in a narrow neck up to 10 cm long.

The generic name, Pancratium, is a Latin word meaning all-in boxing and wrestling match. The derivation is probably from the Greek words pan meaning all and kratos meaning strength, referring to the Mediterranean plants bearing the name noted for their strength in surviving extremely hot and dry conditions.

The linear or strap-shaped, bright green leaves are often spirally twisted, from three to eight in number. Present in picture during flowering, the leaves may also appear before or after flowering.

The white flowers grow solitary or in umbels of two. They are short-lived and mainly night-flowering. Look carefully, the two pale spathe bracts low down emerge among the brown, surrounding leaves from other plants at about ground level.

The long, slender perianth tube starts low in cylindrical shape becoming funnel-shaped at the top. It is up to 14 cm long and pale green, splitting into the six narrowly lance-shaped tepals with curved down tips around the white central cup.

This filament cup is fused from the membranous filament bases arising from the perianth tube mouth into its delicate shape up to 4 cm long. The filament tips are free, assuming thread-like shapes from the rim of the cup, angled inwards where their linear anthers with cream pollen hang over the cup. The ovary below is nearly globose, topped by a style usually protruding above the cup.

The species is widely distributed across Sub-Saharan Africa, as far south as northern Gauteng, North West, Limpopo and Mpumalanga. This is the only one of the about 20 Pancratium species occurring in southern Africa. It was first collected in Ethiopia during 1840. Most pancratiums occur around the Mediterranean.

One of these ephemeral Pancratium flowers features in Greek mythology in the story relating to the abduction of Persephone to the underworld where she married Pluto, the god of Hades. Her mother, Demeter, the goddess of agriculture responsible for fruitfulness, grieved so much that plant life on earth, particularly wheat, became endangered. Divine intervention from Zeus and Associates alleviated this by featuring a compromise: the periodic return of Persephone to her mother for a parental holiday in Greece from Hades. Pluto ensured Persephone's regular return, by making her eat a pomegranate seed before she left. (Demeter's name is derived from de meaning earth and meter meaning mother.)

This ensures robust seasonal recovery, the spring of Demeter’s happiness. It signals flower and fruit growth, culminating in a summer harvest and food for all. Then follows Persephone's annual return to her husband, resulting in sad autumn and deadly winter; the growth cycle that still highlights life on earth.

The habitat of P. tenuifolium is mostly arid, sandy soils where the deep-seated bulbs enjoy summer rain and good drainage. The plants grow among low scrub and the light shade of open, deciduous woodland, responding to seasonal rain. The species is not considered to be threatened in its habitat early in the twenty first century (Duncan, et al, 2016; Leistner, (Ed.), 2000; Mavromataki, 1997, Greek Mythology and Religion. Ha'i'talis, Athens; iNaturalist; http://redlist.sanbi.org).