Home » TYPES » Bulbs » Nerine sarniensis
Back to Category Overview
Total images in all categories: 11,894
Total number of hits on all images: 7,134,853 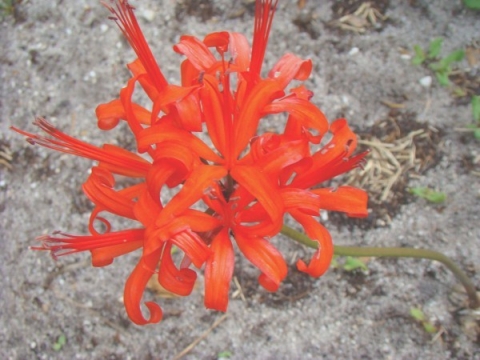 Nerine sarniensis is a Western Cape perennial geophyte with a fascinating story of botanical expatriation. As the prettiest flower among the sought after Cape of Good Hope nerines, a consignment of N. sarniensis bulbs were shipped to Holland in 1659, only seven years after the first permanent settlement at the Cape. The ship got into trouble and the boxes of bulbs were jettisoned from the sinking ship near the island of Guernsey. Some of the bulbs from the broken boxes started growing... becoming "indigenous".

N. sarniensis are today still growing on the island, known widely as the Guernsey lily and cultivated there commercially for cut flowers. There are other stories of how these Cape flowers first came to Guernsey (www.plantzafrica.com). None of them as spectacular as the one above, but possibly closer to the truth?

As long as Google can’t provide verified records of “the real” history of things, like photo images of flowers growing in the Garden of Eden, in many cases we shall never know for sure what really happened.

We are story dependent and grow our own, individualising plausibility. Plausible often means that version of a story where the investigator became tired of searching for the truth. Thus history remains the bag of tricks we play on the dead, as Voltaire is rumoured to have said.