Home » TYPES » Bulbs » Pauridia aquatica
Back to Category Overview
Total images in all categories: 11,921
Total number of hits on all images: 7,169,741 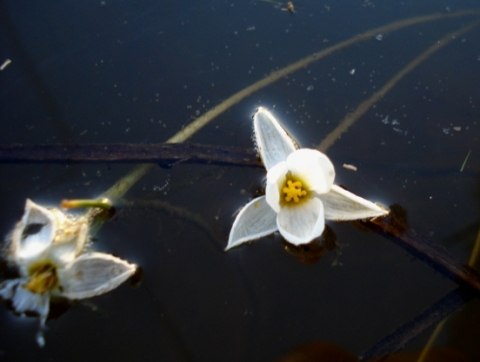 Pauridia aquatica, previously Spiloxene aquatica, in Afrikaans the watersterretjie (water starlet), is an aquatic plant, a perennial herb. It grows from a corm varying in size between 10 cm and 30 cm. The corm is replaced every growing season by a new one developing on top of last season's old corm.

This species has a generally smooth corm, sometimes with only vestiges of a tunic at its top. The protective tunic of a cormous plant originates from the skin of the old stem, acting as a shield against hard objects in the ground. Because it grows on top of the old corm, the old stem is conveniently positioned around the developing corm as it grows.

P. aquatica corms grow in soft mud at the bottom of open water. They do not need as much protection against damage from the surrounding earth as their counterparts on other species growing in soil.

The plant has quill-like, somewhat hollow leaves, taller than the flowers. The leaves are linear in shape and 3 mm wide.

The plant is mainly found in the Western Cape, also in the Northern Cape. Its habitat is marshes, vleis, streams and seasonal pools. The species is not considered to be threatened in its habitat early in the twenty first century.

There are about 25 species in this genus, all South African, the family Hypoxidaceae or stargrass (Manning, 2009; Bond and Goldblatt, 1984; www.plantzafrica.com; http://redlist.sanbi.org).