Home » TYPES » Bulbs » Pauridia aquatica flower
Back to Category Overview
Total images in all categories: 11,238
Total number of hits on all images: 5,948,233 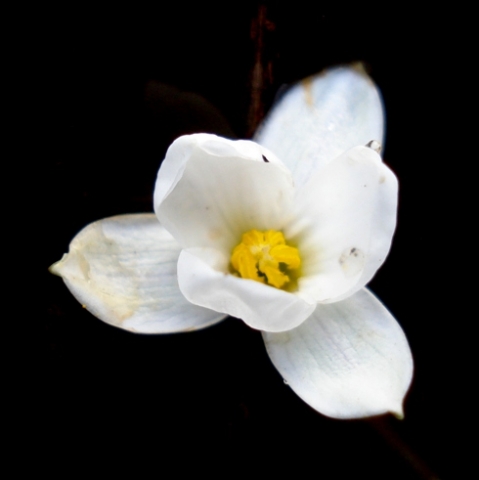 The white flowers of Pauridia aquatica, previously Spiloxene aquatica grow in clusters of two to seven per stem. The flowers are often scented. Flower diameter is about 1,5 cm, between star-like and triangular in shape. The outside or lower tepal surfaces are tinged green.

The yellow in the flower centre is caused by the presence of six large, oblong, curved anthers. The paler style surrounded by the stamens, has three stigma branches. There are two leaf-like bracts clasping the flower’s pedicel. These plants flower throughout winter and spring. Seeds are produced in dehiscent capsules.

Plants of the Pauridia genus have no nectaries; for that matter, none of the species in the Hypoxidaceae family have them. This means they have no nectar to trade and can only reward pollinators with some of their pollen for performing the vital rites. This may explain the rather large anthers seen on the flowers. The flowers open widely to allow access to pollen collectors. Flowers also close in inclement weather, conserving product when the obliging bees and beetles are inactive (Manning, 2009; Bond and Goldblatt, 1984; www.plantzafrica.com).