Home » TYPES » Bulbs » Pauridia curculigoides
Back to Category Overview
Total images in all categories: 12,091
Total number of hits on all images: 7,393,185 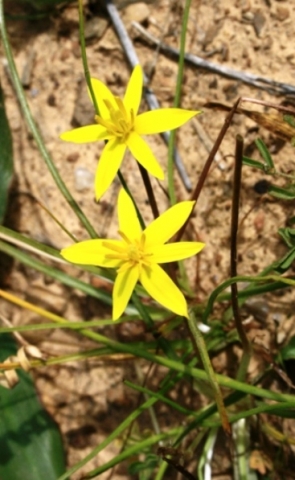 Pauridia curculigoides, previously Spiloxene curculigoides, is but one of the flowers belonging to this genus that bears the common names of Cape star and in Afrikaans sterretjie (little star).

The plant is a small, cormous perennial growing a few narrow leaves from the base and a lemon yellow, six-tepalled flower on a green stalk. It can be distinguished from P. canaliculata by the dark central circular area or "peacock eye" of the latter species present at the tepal bases. The outer surfaces of the tepals of P. curculigoides are green. The stamens form a typical ring around the style in the flower centre.

The plant is found in the Western Cape from the mountains around Tulbagh to the Hottentots Holland Mountains, the Cape Peninsula and eastwards to the Agulhas Plain.

The plants commonly grow in fynbos, in moist areas, sometimes through seepage. The species is not considered to be threatened in its habitat early in the twenty first century (http://redlist.sanbi.org).