Home » TYPES » Bulbs » Prototulbaghia siebertii
Back to Category Overview
Total images in all categories: 11,416
Total number of hits on all images: 6,192,875 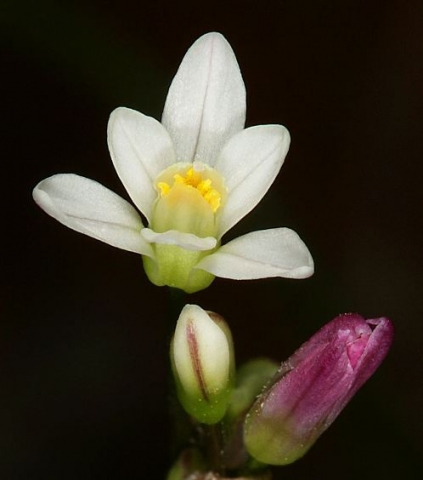 Prototulbaghia siebertii is a recently discovered species. It is a deciduous, bulbous plant of the Alliaceae family (first described by Vosa in Caryologia in 2007). It is endemic in Sekhukhuneland, a well-known centre of plant endemism of southern Africa.

It seems as if the Alliaceae family may have been moved back into Amaryllidaceae, being reduced to a subfamily called Allioideae. This plant is the only (remaining?) species in its genus; the name Prototulbaghia suggests that it preceded the Tulbaghia genus (garlic flowers) in the evolutionary development. The specific name was chosen in honour of Dr. Stephan Siebert who discovered the plant.

The plant is a small (15 cm) geophyte with nearly prostrate, fleshy leaves, spreading and dark green. They exude a garlic aroma when crushed. The plant grows near the edges of flat rock plates in clayey soil, usually in wet places during the summer rainy season and very dry in the plant’s dormant winter phase. At the underground base grows a cylindrical to pear-shaped, corm-like rhizome and fleshy, spidery roots.

Blooming occurs after spring rains; some of them may still be present in autumn. The flowers are white with a suggestion of pink. They last only for one day when old flowers turn pinkish purple as they close in the afternoon. There are six tepals, a monocot feature. Each tepal has a longitudinal line down its centre, visible on both surfaces. Every inflorescence produces about one flower per day for a week, to be followed by a repeat phase later on, depending on resources stored in the rhizome.

The inner three stamens have markedly winged filaments, a feature shared with some American species of the Alliaceae family. This has to be a philogenetic phenomenon that must have developed independently in parallel, given the distance! The six yellow anthers can be partly seen in the given picture (Vosa, et al, Flowering Plants of Africa (62, 2011); Wikipedia).