Home » TYPES » Bulbs » Raphionacme hirsuta
Back to Category Overview
Total images in all categories: 9,612
Total number of hits on all images: 4,324,320 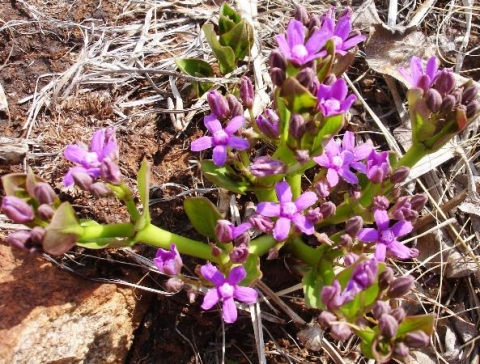 Raphionacme hirsuta is commonly known as false gentian. It is a small perennial with branches emanating from a stout tuberous rootstock, a caudex.

The leaves are opposite, elliptic, sometimes hairy with whitish net-veining. Clusters of flowers come in different shades of pink to lilac from late winter into summer. There are small corona lobes at the centre inside the corolla.

The distribution of this plant covers the eastern half of South Africa and in all provinces except the Western Cape, as well as in several of the neighbouring countries.

The habitat is grassland and savannah. The flowers are often conspicuous after veld fires that do not affect the tubers. The species is not considered to be threatened in its habitat early in the twenty first century (Manning 2009; http://redlist.sanbi.org).