Home » TYPES » Bulbs » Pauridia canaliculata
Back to Category Overview
Total images in all categories: 11,238
Total number of hits on all images: 5,948,270 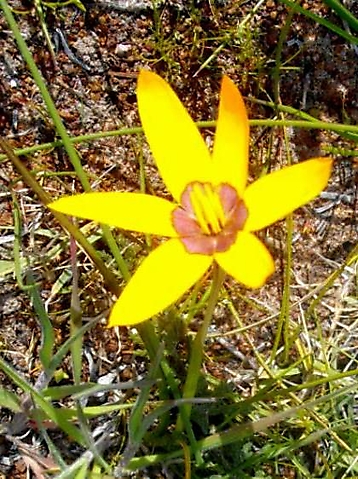 Pauridia canaliculata, commonly the browneye Capestar and previously Spiloxene canaliculata, is a cormous perennial reaching heights from 10 cm to 30 cm. It has narrow, grass-like leaves that are U-shaped in cross-section.

The large, star-shaped flower is borne solitary on a bare stalk. It is subtended by one large, leaf-like bract. The flower is yellow or orange, the lower tepals surfaces striped. On the upper surfaces, the bases of the spreading tepals are brown, the yellow anthers erect in the centre.

Flowering happens from before midwinter to spring. The tepals are broader than those of P. capensis that also has markings in the eye of the corolla. The fruit is a capsule that is dry when ripe, opening at the top. The seeds are J-shaped.

The species distribution is small, from the Cape Peninsula (maybe still) to around Darling and Malmesbury. The photo was taken in the Tinie Versfeld Wildflower Reserve near Darling in August.

The habitat is seasonally moist, granitic flats. The species is considered to be endangered in its habitat early in the twenty first century due to agriculture, urban expansion and alien grass invasion (Manning, 2007; Manning and Goldblatt, 1996; iNaturalist; http://redlist.sanbi.org).