Home » TYPES » Bulbs » Nerine rehmannii
Back to Category Overview
Total images in all categories: 12,068
Total number of hits on all images: 7,360,594 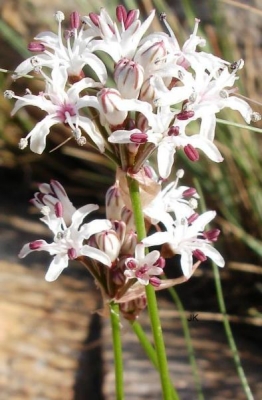 Nerine rehmannii is a small plant bearing flowers that are nearly white. The flowering plant is often only 10 cm in height. The leaves are thread-like. Like other members of its genus, there are sometimes no leaves at the time of flowering in late summer or autumn. The fruit is a three-lobed capsule.

N. rehmannii is found in Gauteng, Mpumalanga and Swaziland. This photo was taken near Tonteldoos in February. The species is not considered to be threatened in its habitat early in the twenty first century (Lowrey and Wright, 1987; www.redlist.sanbi.org).